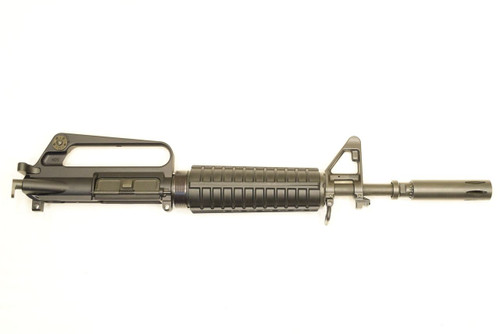 In 1966, the Army decided it wanted a slightly longer barreled version of the XM177E1, 11.5 inches instead of the original 10 inch barrel.

Wildly popular with Special Forces, SOG, LRRP teams, SEAL's, CIA and foreign Special Forces both in Vietnam, and elsewhere in the world. British and Australian SAS are particularly famous for using this version.

After 1974 the 4.25" Moderator was dropped in favor of the A1 Birdcage on further Commando models until the early 1980's.

It is a common misconception that the XM177E2 used a Delta Ring during the Vietnam War. We have researched this extensively and do not believe the Delta Ring was used until the early 80's on any Colt. "There are rumors to suggest the Delta ring was actually developed sometime in the mid-70's (1973-75) - but all photographic evidence seems to point to 1982 for first official use.

From 1960-1965/66 all M16 variants were delivered with Chrome BCG's. 1967/68 on-wards the finish was changed to Mag Phosphate, as it is to this day. So it's entirely possible either was used, in anything, after 1967. Choose Chrome or Phosphate - no cost difference.. or get it without a BCG if you don't need one.