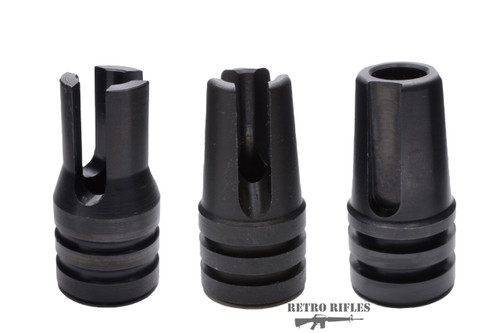 The first Model AR15 (Model 601) had what is often called a "Duck Bill" Flash Suppressor. It was the only real Flash Suppressor available in Vietnam from the introduction of the Colt model 601 in 1960, until about 1962/63 when replaced with the reinforced "3 Prong" with which we are all familiar.

3 Prong was much more widely deployed (1963-1967) and can basically be used on any variant in the Vietnam War since so many were already in country by 1968.

"Banned States" 3 prong has fake slots on the side (cosmetic only) and will pass the "Pinky Test" in states where this is necessary.

Made in the USA. Steel. Both are authentic reproductions of the original.

For washer selection (Here). For these we recommend using the lock washer.

The A1 Birdcage flash hider replaced the 3 Prong on all M16 rifles in 1967, and continued to be used

Standard A2 Flash Suppressor. Correct for all builds after approximately 1984-1988 (depending on bra

Standard A2 Flash Suppressor. Correct for all builds after approximately 1984-1988 (depending on bra

The A1 Birdcage flash hider replaced the 3 Prong on all M16 rifles in 1967, and continued to be used

The US Military has used three different types of washers to keep a muzzle device in place: .223/

Pre-Order only and Expecting them to be going out in July 2022.   The original 607 handguard