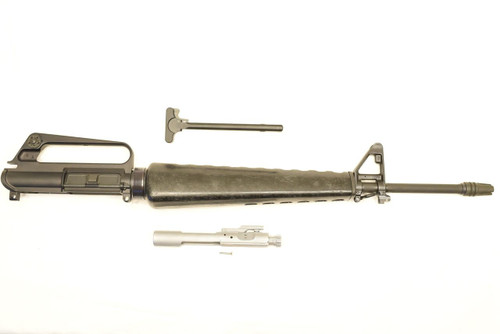 This is a highly authentic reproduction of the Colt 602 / 604 with Charging Handle. Available with or without Chrome BCG with machined retaining pin.

- Chrome M16A1 - has serrations on the side (to work with the Forward Assist). Though originally shipped with a "slick side" BCG, starting around 1964/65 the Army switched to Chrome M16 carriers with serrations - and therefore so did the Air Force even though their guns didn't have Forward Assists (to simplify spare parts logistics). So it was not uncommon to see 602's in the war having BCG's with serrations.. and more than likely on Air Force models. The only reason we even bother to offer two different Chrome BCG's is because of the noticeable cost difference between the two.

The first few Colt 602's still had the gen 1 "duck bill" 3 prong.. but this was soon replaced by the gen 2 "3 Prong".. and most 602 models were either delivered with the 3 Prong, or were converted thereafter.

Sling Swivel Assembly for AR15 / M16 with original Rubber Buttpad Buttstock. ** These will not work