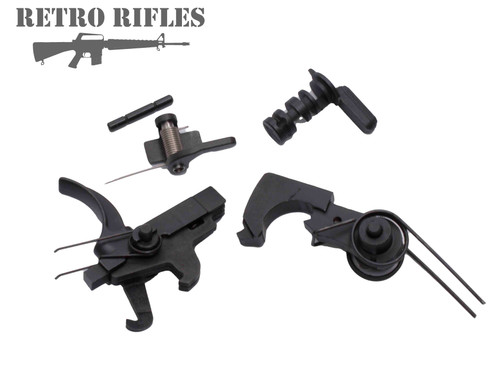 In the Mid 1960's Colt came up with a 4 way fire control group for evaluation by the US Military. Though considered several times by the Army, it was never officially adopted. In the 90's Colt and DPMS made 4 way parts but these have not been seen in many years and to our knowledge no one in the USA is manufacturing these today. But there is another answer..

Taiwan decided to include a 4 way Fire Control in their current issue T91 Military Rifle - and since the T91 uses standard M16 Fire Control this 4 way will work well in a standard AR lower. Taiwan did make some slight design changes but otherwise works like the old Colt and DPMS version.

Four options available on the Selector: Safe, Semi, Burst, Full Auto. (on some lowers the selector stops will have to be removed to allow full 360 rotation of the selector)

These are the original T91 Military parts, not copies.

* Note on ownership: Though it is legal in most states to order and own full auto Fire Control components - it is not legal to install them in your AR or T91 lower unless you are properly licensed to do so. All NFA rules apply.

* THIS ITEM IS BACKORDERED WITH NO CURRENT ETA. * ORDERING NOW WILL PLACE YOU IN LINE FOR THE NEXT

Full Auto Sear Pin for the M16 Auto Sear (not included). This is for the pin only.   Steel