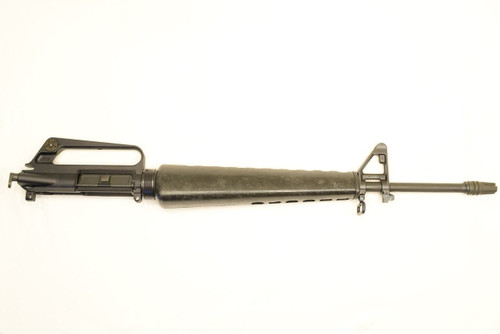 The Colt 603 XM16E1 is the last version of the "experimental" series before official adoption of the later M16A1. Fielded 1963-1967. Also used extensively by the British/Australian SAS as well as numerous foreign Special Forces.

This model was made famous in the movie "We were Soldiers" being the primary weapon of the 1st Calvary Division (Airmobile) at the Battle of Ia Drang Valley in 1965.

This is a highly authentic reproduction Colt 603 XM16E1 with Charging Handle. Available with or without BCG.

From 1960-1965/66 all M16 variants were probably delivered with Chrome BCG's. 1967/68 on-wards the finish was changed to Mag Phosphate, as it is to this day. So it's entirely possible either was used, in anything, after 1967. Choose Chrome or Phosphate - no cost difference.. or get it without a BCG if you don't need one.

Due to high demand we are pausing short pin and full assembly barrel orders   Options: St