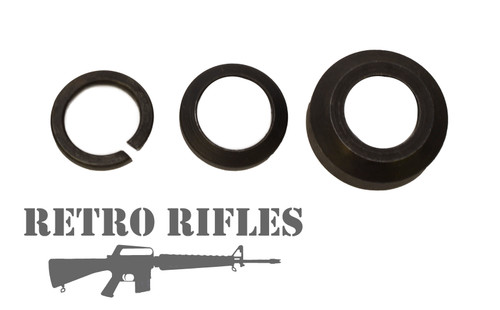 In 1966 Colt sent about 3,000 10 inch barrel XM177E1's to Vietnam. By January of 1967 the Army had decided to increase the barrel length to 11.5 inches (XM177E2) and use the same 4.25 long "Moderator" flash/blast suppressor- but adding this "Grenade Ring" between the barrel and the Moderator. The point was to allow attachment of the under barrel Grenade Launcher, which was not easily done on the E1.

This is primarily an XM177E2 / GAU-5 A/A only accessory, but was available on all 11.5" Colt Commando models thereafter.

To our knowledge no washer was used with the Grenade Ring (if one was ever used it was the Lock Washer since that was all they had at the time).

But the Army did not care about "Esthetic Timing" of the wrench flats on each side of the Moderator. Today most buyers do care if all the nice diagonal line on their Upper line up or not.. so we use a hidden Crush Washer inside the Grenade Ring to add enough resistance to the Moderator allowing Timing of the wrench flats.. either horizontally or diagonally (your choice).

If you need a washer (Here)

The US Military has used three different types of washers to keep a muzzle device in place: .223/